In Japan, culture media with enzyme substrate such as TCBS agar and CHROMagar are used as selective media for Vibrio parahaemolyticus.  I will deal with TCBS agar in this piece of column. 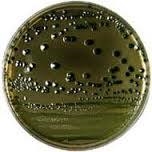 The pH level at which vibrio can grow is 5.6-9.6 and its optimum is 8.0.  On the other hand, the optimum pH for many other bacteria falls within 6.8-7.6 and their growth will be inhibited at pH outside this range.  As this medium is pH 8.6, bacteria other than vibrio cannot grow.

3. Functions of the medium components

Essential nutrients for bacterial growth are ①nitrogen source and ②carbon source.  Bacteria cannot break down protein unless it is digested or decomposed to be the form of polypeptide or peptide.  A substance generated from digestion or decomposition of protein is called peptone.  There are several types of peptones such as casein peptone, soy peptone, meat peptone, myocardial peptone, and gelatin peptone.  In TCBS agar, casein peptone (pancreatin digestion of the pancreas) and papain digestion of animal tissue are used.  Casein peptone is used as a basal peptone due to its economical superiority.  Papain digestion of animal tissue acts as a growth-promoting substance like an extract because it is rich in carbohydrate, vitamin and mineral.

Yeast extract is not an essential nutritional element for general bacteria to grow.  It is usually used as a supplementary nutrition of peptone.  Adding extracts will make up for the loss of nutrients and promote bacterial growth.  Also, vitamins in extracts are rich in coenzymatic function (increasing enzymatic activity of bacteria).

Sucrose is added for the purpose of ①releasing energy from carbon source and ②distinguishing bacteria through decomposition of carbohydrate.  This enables TCBS agar to indicate whether a bacterium has a sucrose fermentation function or not.  Vibrio parahaemolyticus does not ferment sucrose, whereas Vibrio cholera does.  Thus these two types of bacteria can be distinguished.

Sodium thiosulfate is used as a sulfur source.  Also, coexisting with sodium citrate, bile, and cholic acid, it inhibits the growth of Gram-positive bacteria and coliforms when medium is alkaline.

BTB, a type of pH indicator, is a pigment whose color changes depending on pH.  As sucrose-fermenting vibrio grown in this medium produce lactic acid, BTB will turn yellow.  Bacteria that do not ferment sucrose will form green and transparent colonies due to alkalinization by degradation of peptone in the medium. BTB can take both protonated and deprotonated states, which changes its color tone.  It turns yellow at pH < 6.0, blue at pH > 7.6, and green in between.  Also, it turns red with very strong acid, and purple with very strong base.

② Collect 1 loopful of culture liquid and streak-smear it on TCBS agar.

④ Determine whether or not colonies are present.

As for grown colonies, conduct a textbook-based test for identification of vibrio.

5. <Quantitative culture> # Conducted if positive in a qualitative method.

⑥ Deliver 0.1ml of each diluting phase by drops onto Thiosulfate citrate bile salts sucrose agar and spread it with a bacteria spreader.

⑧ Count colonies and figure out the bacterial count per gram.

1. Bacteria other than vibrio, such as K.pneumoniae, Proteus spp., Pseudomonas spp., Aeromonas spp., Enterococcus spp., and Candida spp., may grow in this medium.  Especially K.pneumoniae forms yellow colonies whose size is remarkably similar to those of Vibrio cholera.  This tendency becomes more pronounced as days go by after producing the medium.  Grown colonies need to be identified.

2. Slow-growing Vibrio cholera or those with weak sucrose-fermenting function may form green or colorless colonies in TCBS agar.  Identification of colonies requires attention.

3. Although many types of vibrio grow in this agar, some types with high nutritional requirement, such as V.hollisae and V.metchnikovii, do not.  TCBS agar is not suitable for the detection of these bacteria.

4. Pathogenic vibrio (such as Vibrio parahaemolyticus and Vibrio cholera) are present in small numbers in a test sample.  They cannot be detected in some cases due to overgrowth of V.alginolticus. This bacterium grows actively and has a strong sucrose-fermenting function.  It changes the whole medium yellow and Vibrio parahaemolyticus, small in number, cannot be detected.

5. Grown colonies in TCBS agar, which were yellow right after being taken out of an incubator, may turn green when left at room temperature (ex. Vibrio cholera).

8. Inaccurate measurement of vibrio count may occur.  Damaged vibrio in food grow insufficiently.  If cell membrane or cell wall of a bacterium in food is damaged by heating, drying, freezing or other production processes, the bacterium will be susceptible to sodium cholate and bovine bile in this medium and its growth will be insufficient.  Also, this medium is not suitable for the detection of Vibrio parahaemolyticus in frozen fish and shellfish.  Pre-culture is needed using an appropriate liquid medium.

9. Performance of TCBS agar differs greatly according to production company and lot.  Quality control of the medium is required when using it.  Ability for growth support and selectivity, above all, of this medium will decrease significantly with passing of time, storage condition, etc.