Among these culture media, BGS agar, XLD agar, HE agar, and dmLIA agar are commonly used in many facilities in the United States. 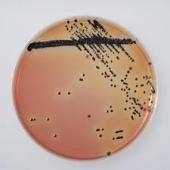 DHL agar is a selective medium for Salmonella and Shigella having been developed by improving Deoxycholate agar by Sakazaki, et.al.

This medium has the following features:

② Bacteria that produce hydrogen sulfide and those that do not can be distinguished (making the differentiation of salmonella easier) through having added sodium thiosulfate.

③ Some kinds of salmonella that cannot grow in conventional selective media for intestinal bacteria (such as Salmonella pullorum and Salmonella gallinarum) can grow in this medium through overall nutritional improvements.

Essential nutrients for bacterial growth are ①nitrogen source and ②carbon source.  Bacteria cannot break down protein unless it is digested or dedomposed to be the form of polypeptide or peptide.

A substance generated from digestion or decomposition of protein is called peptone.  There are several types of peptones such as casein peptone, soy peptone, meat peptone, myocardial peptone, and gelatin peptone.  In DHL agar, casein peptone (pancreatin digestion of the pancreas), acid hydrolysate of casein, and meat peptone (pepsin digestion of meat) are used.  Meat peptone is nutritionally superior (rich in amino acid, vitamin, carbohydrate, etc.) and indispensable for highly selective media.  Casein peptone acts as a basal peptone due to its economical superiority.  I have no idea why acid hydrolysate of casein is used (this medium has a mysterious composition for me).

Beef extract, rich in vitamin, nucleic acid, amino acid, organic acid, mineral, etc., is used as a supplemental growth-promoting substance rather than carbon/nitrogen source.  Beef extract is made by leaching meat in water and concentrate it (by heating).  As the heating modifies the components, high concentration of beef extract can inhibit the growth of bacteria.  Therefore, it is usually used at approximately 0.3-0.5 % of concentration.

Lactose and sucrose are added for the purpose of ①releasing energy from carbon source and ②fermenting bacteria through decomposition of carbohydrate.  This enables DHL agar to indicate whether a bacterium has a lactose/sucrose fermentation function or not.  Salmonella and Shigella ferment neither lactose nor sucrose, whereas other intestinal bacteria ferment either or both of them.  Thus Salmonella/Shigella and other intestinal bacteria can be distinguished.

Sodium deoxycholate, a type of bile salt, is an anion surfactant. The purpose of adding this substance is ①inhibiting the growth of Gram-positive bacteria and yeast-like fungus (Gram-positive bacteria are lysed by surfactant and cannot grow because they have thick peptidoglycan layer and no extracellular membrane, whereas Gram-negative bacteria have thin peptidoglycan layer and thick extracellular membrane which prevents the lysis and growth-inhabitation), and ②inhibiting the swarming of proteus.

This reaction is greatly influenced by pH.  Low pH level will inhibit the production of hydrogen sulfide.  In other words, even hydrogen-sulfide-producing bacteria do not form black colonies when the pH value is low.

⇒Bacteria that ferment lactose/sucrose do not form black colonies even when they produce hydrogen sulfide.

Neutral red, a type of pH indicator, is a pigment whose color changes depending on pH.  It turns red with pH6.8 or below and yellow with pH8.0 or above.  Lactose/sucrose-fermenting bacteria in colonies of Gram-negative bacilli produce lactic acid and red-discolors neutral red.  Sodium deoxycholate turns to insoluble deoxycholic acid in a highly acidic environment.  It binds to neutral red and forms turbid red colonies.  Bacteria that do not ferment lactose/sucrose only degrade peptone, which make colonies alkaline and clear colorless.

② Collect 1 loopful of culture liquid and streak-smear it on DHL agar.

④ Determine whether or not black colonies are present among grown ones.

⑤ As for black colonies, conduct a textbook-based test for identification of salmonella.

5. < Quantitative culture> # Conducted if positive in a qualitative method.

⑦ Deliver 0.1ml of emulsion of each diluting phase by drops onto DHL agar and spread it with a bacteria spreader.

⑨ Count colonies having positive reaction for hydrogen sulfide and figure out the bacterial count per gram.

2. Bacteria other than salmonella form black colonies same as salmonella.  Three types of enteric bacteria, Citrobacter freundii, Proteus vulgaris, and P.mirabilis, can produce hydrogen sulfide as well.  This is because they have little or no fermentative ability of sucrose.  (If a bacterium has a high fermenting ability, it won’t form black colonies even if it produces hydrogen sulfide.)

3. If count of salmonella in a culture is low, it cannot be detected in some cases due to overgrowth of other bacteria.  As this medium’s selectivity (the ability to inhibit the growth of other bacteria) is relatively low, there are many enteric bacteria, such as coliforms, in this medium, which prevents the detection of small number of salmonella.

4.  Enterococci form colonies similar to those of Yersinia.  Since deoxycholate content is kept low in this medium, growth of enterococci cannot be inhibited completely.   Enterococci, lactose-fermenting bacteria, form red colonies.

6. Damaged salmonella in food grow insufficiently.  If cell membrane or cell wall of a bacterium in food is damaged by heating, drying, freezing or other production processes, the bacterium will be susceptible to deoxycholate in this medium and its growth will be insufficient.  This can lead to an inaccurate measurement of salmonella count.  This culture medium does not contain components to deal with damaged bacteria.  ＊It is recommended to conduct a pre-enrichment culture in order to activate, repair, and increase bacteria prior to selective enrichment culture because salmonella can be damaged, dormant, or decreased through food processing.  <Standard Methods of Analysis in Food Safety Regulation of Japan (2004) >

7. When this culture medium undergoes autoclave sterilization or too much heating, ①its selectivity will be suppressed and ②gel strength of agar can be decreased.