There can be intestinal pathogens such as , Shigella .Salmonella typhi, Vibrio cholera, and Salmonella in feces of humans and animals.  Indicator organisms of fecal pollution for food materials/products are coliforms, fecal coliforms, E. coli, and enterococcus.    In this piece of column, I will deal with desoxycholate agar medium used to determine the coliform bacteria count.

In 1935, Dr. Leifson reported that desoxycholate agar medium was superior in recovery rate of salmonella and Shigella.  This is because the content of citrate and desoxycholate is designed not to be influenced by the growth of coliforms.  This medium was developed from clinical specimens as a screening medium for salmonella and Shigella.  Desoxycholate agar medium appears in the Food Sanitation Law of Japan as a recommended medium for coliform bacteria count. 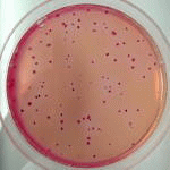 １．Approximate formula for per Liter

Sodium desoxycholate prevents the growth of Gram-positive bacteria (except for enterococcus) and yeast-like fungus.  Growth of most Gram-negative bacteria, however, is not inhibited by this substance.  Gram-negative bacilli which have lactose fermentation function grown in this medium produces lactic acid (acidic) and red-discolors neutral red solution, a pH indicator.  Sodium desoxycholate turns into desoxycholate, acidic and insoluble, and binds to neutral red to form turbid red colonies.  Bacteria without lactose fermentation function will form colorless and transparent colonies by the action of ammonia (alkaline), which is a peptolytic product of the medium.

Functions of the agar components

Essential nutrients for bacterial growth are ①nitrogen source and ②carbon source.  Since bacteria cannot break down protein by themselves, they cannot use protein as nutrient unless protein is digested or decomposed to be the form of polypeptide or peptide (a substance generated from digestion or decomposition of protein is called peptone).  Bacteria can use peptone as nitrogen/carbon sources to grow.  Peptones generally added in culture media are; casein peptone, soy peptone, meat peptone, myocardial peptone, and gelatin peptone.  Among various types of peptones, most suitable ones are chosen according to the composition of the medium.  Mixture of casein peptone (pancreatin digestion of the pancreas) and meat peptone (pepsin digestion of meat) are used in Desoxycholate agar medium.  Casein peptone acts as a basal peptone due to its economical superiority.  Meat peptone is an essential peptone for selective media because it is nutritionally superior (in the content of amino acid, vitamin, carbohydrate, etc.) and makes up for the nutrients lacking in casein peptone.

Lactose (carbohydrate) is added for the purpose of ①releasing energy from carbon source and ②Ferment bacteria through decomposition of carbohydrate.  This enables desoxycholate agar medium to indicate whether a bacterium has a lactose fermentation function or not.

Sodium desoxycholate, a type of bile salt, is an anion surfactant having the following functions: ①inhibiting the growth of Gram-positive bacteria and yeast-like fungus (Gram-positive bacteria are lysed by surfactant and cannot grow because they have thick peptideglycan layer and no extracellular membrane, whereas Gram-negative bacteria have thin peptideglycan layer and thick extracellular membrane which prevents the lysis and growth-inhabitation), ②inhibiting the swarming of proteus.

have thin peptideglycan layer and thick extracellular membrane which prevents the lysis and growth-inhibitation), ②inhibiting the swarming of proteus.

Neutral red, a type of pH indicator, is a pigment whose color changes depending on pH.  It turns red with pH6.8 or below and yellow with pH8.0 or above.

Dipotassium phosphate serves as a buffer that maintains pH of culture media.

Agar is used to solidify media.  Raw material of agar is seaweed such as Gelidiaceae and Gracilaria vermiculophylla.  The latter one is generally used to make agar for a culture medium.  A principal component of agar is agarose with linear sugar, which makes bacterial degradation difficult.  Agar can contain relatively high weight of water molecules and has a spongy structure.  As it can maintain water and nutrition, agar is suitable for a culture medium of bacteria.  The temperature at which agar medium begins to melt by heating is called “melting point”, and that melted agar medium begins to solidify is called “congealing point”.  The melting point of agar is 85-93 °C and the congealing point is 33-45 °C.  These figures vary according to the ingredients mixed into agar.  Quality of agar determines quality of the medium.  Fine agar has superior transparency, jelly strength, viscosity, and water retentivity.

3. How to use (pour bilayer method)

② Dispense 15ml of desoxycholate agar medium heated at 45-50°C and mix it with the test fluid.  After agar is solidified, overlay 5ml of the medium.

＊The purpose of this overlaying is to prevent colonies from swarming and sliding, and to form typical colonies (those VP-positive and VP-negative bacteria have the same color) by inhibiting the production of VP-positive acetoin.

④ Count large murky-red colonies as those of coliforms.

4. Limitation of this culture medium

Many of the Gram-negative bacilli grow in this culture medium.  Among them, bacteria without lactose fermentation function form colorless and transparent colonies and can be fermented from those of coliforms.  However, bacteria with lactose fermentation function (such as Aeromonas, Kluyvera, Rhanella, Yersinia, Acinetobacter) form colonies similar to coliforms’ (the above mentioned bacteria are not classified into coliforms in terms of food hygiene).

As content of desoxycholate is kept low to increase the recovery rate of coliforms, growth of enterococcus cannot be completely inhibited.  Enterococcus, which can ferment lactose, forms red colonies as well (but smaller than those of coliforms).

4. When this culture medium undergoes autoclave sterilization or too much heating, its selectivity will be suppressed and gel strength of agar can be decreased.