HACCP is one of the most effective methods to ensure food safety.  It calls for HA (Hazard Analysis), such as pointing out the risk of pathogenic microbial contamination, at each step of food handling.  Based on HA, how to ensure safer products is examined regarding what kind of measures should be taken at which steps of food handling.  Then CCP (Critical Control Point), a task whose slack control could harm consumers’ health, is specified.  HACCP ensures product safety by continuously monitoring CCP and taking necessary measures (Figure 1).  The Ministry of Health, Labour and Welfare (MHLW) in Japan has announced a policy of making HACCP mandatory for food handlers.  In this piece of column, I will deal with this topic. 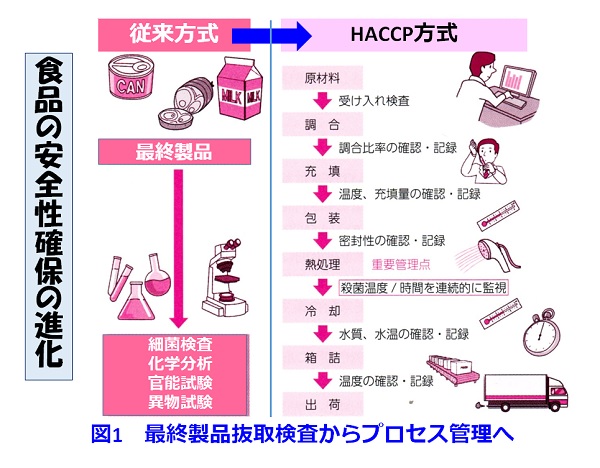 HACCP was developed as a part of US space development program started in the 1960’s aiming at ensuring microbial safety of space food.  “Food poisoning in outer space would cause more serious trouble than on earth.  How can we supply safer food to astronauts?” --- HACCP was developed to solve this issue.  Before its birth, approaches to ensure food safety relied much on sampling inspection as shown in the left of Figure1.  Process control of food handling is more reliable and reasonable than sampling inspection of end products.

Now HACCP has grown to be a control method to ensure safety of general food, and practical examples of HACCP integrated with quality control are increasing.  Codex Alimentarius Commission (see my column #20) has confirmed the effectiveness of HACCP and employs it as an international standard.

2) HACCP is a compound system

HACCP does not function fully by itself.  As shown in Figure2, its application requires use of safe and good raw materials, hygienic environment, and personnel trained in food hygiene.  Good Agricultural Practice (GAP) is a system setting goals in properly practicing agricultural works, trying to solve problems, and planning/executing voluntarily to maintain the good performance.  Good Manufacturing Practice (GMP) is a planning system for food manufacturing business in pursuit of hygienic environmental improvement/operation process. 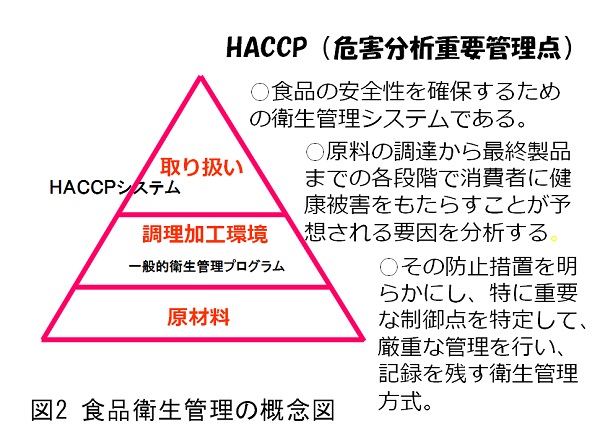 HACCP was developed in order that hygienic problems which cannot be solved with GAP and/or GMP would be strictly controlled based on scientific grounds.  GAP and GMP are included in Prerequisite Programs, which also includes Good Hygiene Practice (GHP) and facility criteria / operating criteria conventionally provided by each prefecture.  Unreasonable and/or ignored prerequisite programs will result in failure to supply safe food.

Since every kind of food is attended with risk to one degree or another, the goal is to reduce the risk to a tolerable level.  As for hazardous objects that cause infection even in minute amounts, such as O157, efforts to reduce the risk should be continuously taken from the farm to the table.  Practically speaking, suppliers of raw materials are required to guarantee the safety and quality of the material.  Documented steps of prerequisite programs are called SSOPs (Sanitation Standard Operating Procedure).  Written manuals should be prepared containing specific details such as name of person in charge, work descriptions and frequency, and how to check and record the state of implementation.

In hazard analysis, microorganisms, chemical substances and foreign substances that might be destructive to food safety are analyzed and countermeasures against them are designed at each process.  Values that must be achieved are set for each critical control point.  Procedures such as how to monitor the values or what to do when the values are not achieved are designed in advance.  Tasks at each step are documented and their results are recorded, which will be a proof that a food product is manufactured in accordance with HACCP program.

In “General Principles of Food Hygiene” and its appendix, Codex Alimentarius Commission recommends to adopt HACCP.  It advises to ensure food safety through “seven principles and twelve tasks in executing HACCP” shown in Table1.  World Trade Organization (WTO), following the recommendation of Codex, requires its member nations to adopt HACCP. 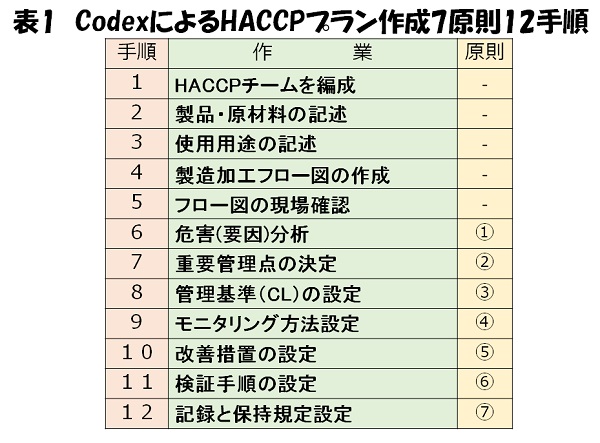 If a nation does not adopt HACCP, rational and scientific explanation is required instead.  EU makes HACCP obligatory for food handlers except for primary producers.  The United States also requires fishery products, meat and its processed food to be controlled by HACCP, and Food Safety Modernization Act (FSMA) mandates all food producers to conduct hazard analysis which is an essential part of HACCP.  Since HACCP has not been institutionalized in Japan yet, we cannot ask exporting nations to conduct HACCP on the principle of non-discriminatory treatment.  Food produced by companies conducting hygiene control through HACCP are preferentially exported to EU and the United States, and their leftover comes to Japan.  Japan imports food produced by companies that do not conduct HACCP.

In many developing countries, let alone developed countries, HACCP has been already adopted aiming at the entry into EU and US markets.  Taking low food self-sufficiency ratio of Japan into account, we need to accelerate the adoption of HACCP in order not to fall behind in the international food procurement.  At the very least, we have to conduct food hygiene control fully understanding HACCP, the current international standard, so that we can give explanations based on HACCP policy.  Japanese traditional non-verbal communication does not make any sense in this context.  It will be regarded as hiding something.  We are in an era when transparent food handling is required welcoming visitors to facilities anytime. 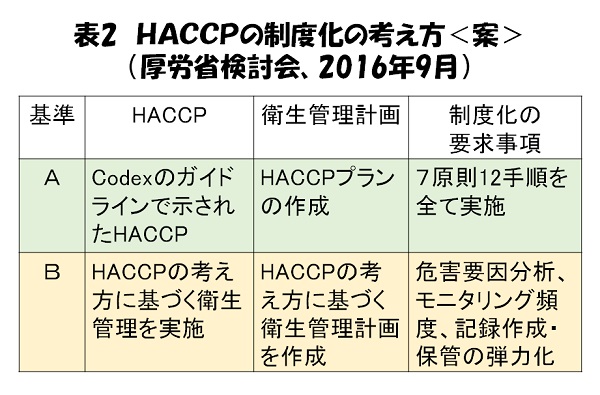 As shown in Table2, examination meetings of MHLW on international standardization of food hygiene management have announced that if Standard A, full introduction of HACCP, is hard to achieve, it is allowable to start with Standard B, a simplified control system based on HACCP policy, and gradually move to Standard A.  Food providers are required to give explanations on food safety based on HACCP.  Otherwise, they will be regarded as providers who disvalue scientific basis and lack in transparency.  Business operators that distribute end products through wide areas or across borders particularly should prepare for the adoption of HACCP.

2) Ministry of Health, Labour and Welfare: Introductory Guide for HACCP in Food Manufacturing.