When we eat fruits, we remove their outer skins and eat them uncooked or drink their squeezed juice.  Also, like smoothie, it is a recent trend of consuming fruits to enjoy their texture of solid body or dietary fiber.  As shown in Figure 1, they sell pre-cut and ready-to-eat fruits, too. Fruits are usually eaten in an unheated condition.  Many people believe that heat will destroy the health-enhancing ingredients of fruits. In this piece of column, I will report food-poisoning cases caused by fruits eaten raw.

What’s the difference between fruits and vegetables?  It’s not necessarily true that what greengrocers sell are vegetables and what fruiterers do are fruits.  Fruit is “kudamono” in Japanese, which used to be “kunomono” in ancient times indicating what grows on a tree branch far above the ground. 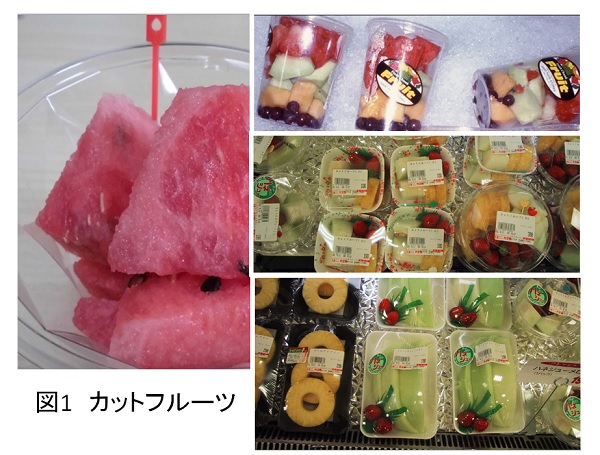 According to one estimate, vegetables along with fruits were eaten raw in Japan around A.D. 200 (the era governed by Himiko).  However, I think people preferred to cook vegetables rather than consume them raw because vegetables were grown on the ground in contrast to fruits.  After the development of manure compost, I suppose, only cibols as spice were eaten raw among vegetables. It is after the popularization of chemical fertilizers during postwar years when vegetables began to be eaten raw in an affirmative manner.  In 1970s, cold chains were born and raw fish and shellfish began to be eaten at the places far from the sea. Therefore, foods other than fruits have been consumed raw only for about four decades. Even today, people in countries without cold chains do not eat raw foods except for fruits.  However, fruits, in spite of such a long history of raw consumption, have caused massive or occasional food poisoning outbreak due to change of food chain, etc. and we still have to be careful.

American people have had a liking for unheated fruits juice since back in the day.  Especially unheated apple juice, called cider, has been loved by Americans. When cider began to be mass-produced in bottles and sold over a wide area, those contaminated by enterohemorrhagic Escherichia coli O157:H7, etc. started to suffer many more people.

The supposable cause of the contamination is: domestic animals were taken into orchards for the purpose of weeding and fertilizing, and fruits fell on the ground naturally, or artificially by shaking trees to save the picking labor.  As I mentioned in my column #23, Listeria monocytogenes (Lm) has caused a mass food poisoning killing 7 people via candy apples using raw apples.

Figure 2 shows O157-contamination test of apples conducted at the Agricultural Research Service of the United States (suburb of Philadelphia) in 1998.  It revealed that uncontaminated green apples would be contaminated if washed with contaminated red apples. In the aftermath, the U.S. government made it obligatory to control fruit juice production with HACCP, which accepts sterilizing methods having effects either equaling or surpassing those of heating treatments.  Therefore, it is legal in the United States to produce and sell unheated but ultraviolet (UV)-treated juices. 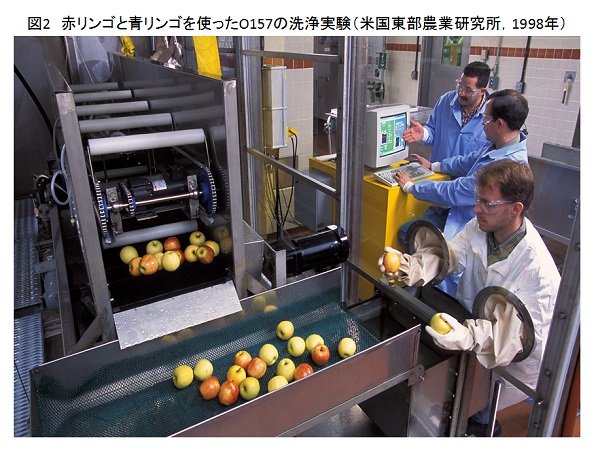 In the summer of 2016, rock melon caused salmonella food poisoning in Australia.  The causative microorganism was Salmonella Hvittingfoss, which has rare serotype. It was reported that 118 people suffered, but fortunately no one was killed.  In Japan, some high-grade melons are grown on greenhouse shelves. In countries with broad land, by contrast, melons are cultivated on the ground on an enormous scale.  In 2011, mass food poisoning caused by cantaloupe killed as many as 33 people in the United States. Its causative microorganism was Lm. According to the investigation by the U.S. government, washing machine used at the melon farm after harvesting might have spread Lm.  Also, we can learn a lesson that crops grown on the ground should have been under strict food hygiene control. When we eat raw fruits, we have to be aware that they could be contaminated by pathogens whether they are grown on the ground or in the air at any point from primary production to consumption.

3) When you eat raw fruits

- Check the channel of distribution

Do not eat fruits grown at farms close to animals or supplied unclean agricultural water.  Do not buy fruits from unidentified or untrustworthy sellers.

Even when you eat hard-rinded fruits such as melons and watermelons, wash them thoroughly with cleaner and running water before you cut them.  Figure 3 is a testing result conducted by the Agricultural Research Service. These micrographs show that water washing alone cannot remove microorganisms from contaminated melons. 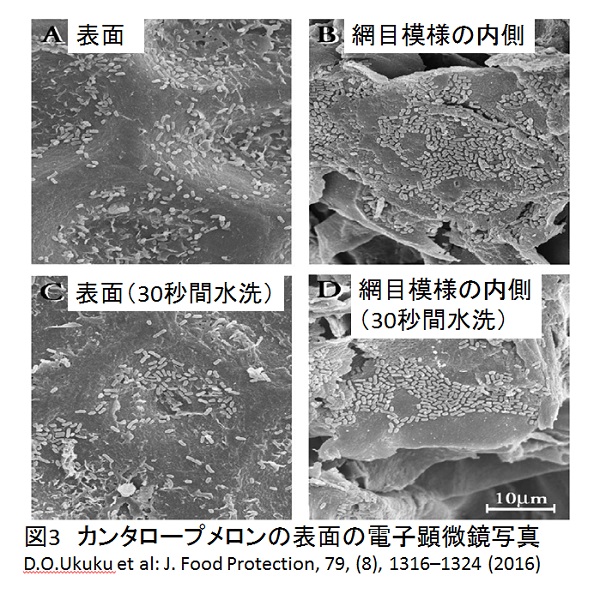 Use cleaners for made vegetables/fruits in washing fruits.  Calcined calcium made from high-temperature-treated shells, etc. can be used to sterilize foods.  It is utilized to sterilize foods such as white radish sprouts, but requires careful handling. It turns strongly alkaline dissolved in water, which can cause blindness if reaches the eyes.  This substance should be used by trained staff within controlled areas.

Consider fruit surfaces unclean.  If you cut fruits without cleaning them up, pathogens on the surface would move to the edible part via a knife, etc.  Even if a fruit was cleanly handled at the production, distribution and retail processes, it can be contaminated during storage at home in refrigerator, etc.
- Consume fruits immediately

Lm slowly grows even at low temperature and more rapidly at room temperature.  Fruits are suitable for the growth of food-poisoning microorganisms because of their rich nutrient and water.  After you cut or liquidize fruits, consume them as immediately as possible. If you cannot for some reason, wrap the leftovers and keep them in a refrigerator.

Some food poisoning cases were caused by eating raw fruits contaminated by hepatitis A virus or cryptosporidium protozoa.  Even frozen fruits can transmit pathogens. Let us eat cleanly-grown fruits from clean farms in a clean manner.  And conduct hygiene control properly from the farm to the table.