#30 Recall of Frozen Vegetables and their Whole Genome Sequencing (WGS)

Listeria monocytogenes (Lm) has caused food poisoning and killed people in many countries (see my column #6).  Huge amount of food that might be infected with Lm are being recalled and discarded around the world.  We should not think of Lm countermeasures as unnecessary just because only one Lm food-poisoning case has been reported in this country. 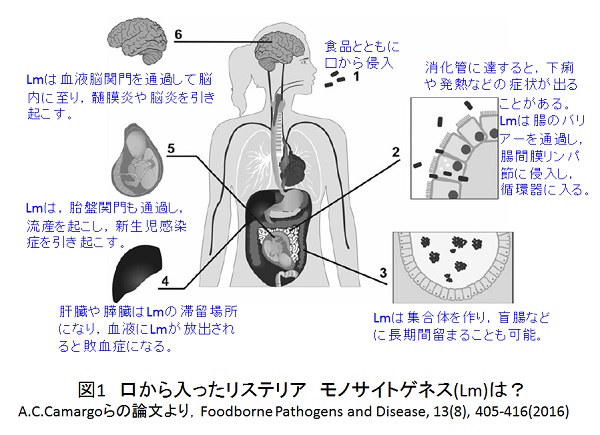 Figure 1 shows how swallowed Lm will act in a human body.  If taken in heavily, Lm would cause digestive symptoms. Without these symptoms, Lm would burrow itself for a long period and then cause severe symptoms such as meningitis, encephalopathy, or miscarriage as shown in the figure.  Measurements against Lm should be taken in Japan, too. Let us prevent evitable food poisoning and spare ourselves from wasteful recalls.

Lm food-poisoning cases had happened occasionally in the United States since the autumn of 2013.  In 2016, their causes turned out to be frozen vegetables. What contributed to the investigation of the cause were traditional bacteriological works and a new method using genetics called “whole genome sequencing (WGS)”.  Lm was detected from various frozen vegetables to be eaten raw (Figure 2). A huge amount of vegetables are processed and frozen at farms and then delivered to food factories in many different places. Various brands of food product using the materials in question were recalled on a massive scale.  The materials had been imported into Japan and recalled too.

Figures 2 and 3, by CDC, show the distribution and the course of Lm food-poisoning outbreak related to this series of recalls.  First patient emerged in September 2013, and 9 people have developed symptoms and received hospital treatments in 4 states at the east and west ends of the United States.  Among them 3 people have passed away, but CDC has concluded that the direct cause of 2 deaths was not Lm.

A major frozen food manufacturer based in Washington started product recalls in April 2016 due to a possibility of Lm contamination.  The cutting-edge WGS has revealed that the relevant food poisoning case happened 3 years ago, September 2013. I think traditional testing methods could not uncover the relevance. 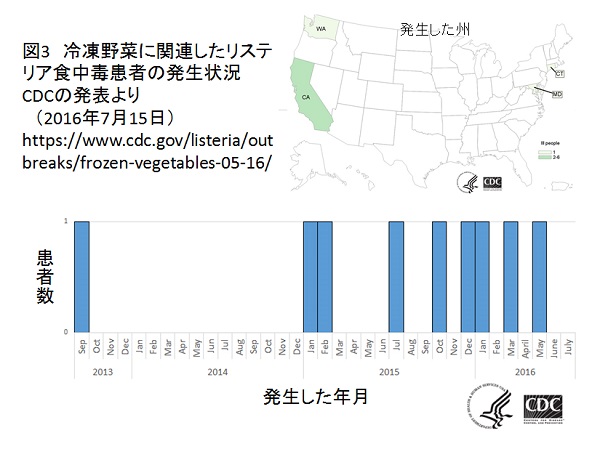 Apart from investigation of the cause of food poisoning, Ohio State independently conducted a monitoring evaluation as a part of routine product tests, and detected Lm from commercial frozen vegetables.  Separated Lm was sent to CDC, and its relevance to the food poisoning outbreak in 2013 became apparent using WGS. The factory that produced the contaminated frozen vegetables suspended the production and its products were recalled.  This factory’s frozen vegetables were used at other factories as raw materials. Its products were very wide-ranged with 42 brand names and more than 400 items. Its final products were sold not only in the United States but in countries of North America and Japan.

“The WGS phylogenetic analysis establishes that there are at least two different strains of Lm present in the facility”, and one strain is “identical to 8 cases of human illness” “and to 6 isolates from finished products”, FDA stated.  These finished products included onions, with 2 isolates in 2014, and green beans with 3 isolates in 2015, tested by a third party laboratory, and a single isolate from white sweet corn collected and tested by the state of Ohio in 2016. Additional investigation established that at least 6 individuals were hospitalized as a result of related Lm-associated illness,” according to the warning letter. 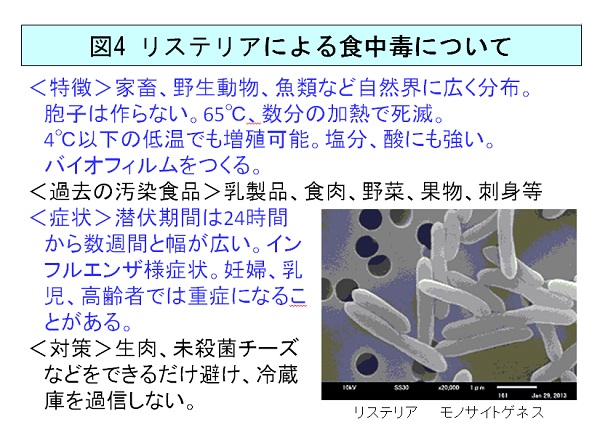 As shown in Figure 4, Lm is a highly environment-adaptable food poisoning microorganism.  It is widely distributed in the environment and naturally found in vegetable gardens or water sources.  Let us continue the habit of clean farming to grow quality materials, processing at clean factories, and handling by staff trained in food hygiene.  If Lm invades and takes root in a factory, its elimination would not be easy. We should implement countermeasures against Lm by understanding its characteristics.

4)FDA: Recalls of Frozen Vegetables, Frozen Fruit, and Other Products Related to Investigation of Listeria Illnesses