Figure 1 shows wheat infected with F.venenatum.  Wheat cannot grow if the infecting F.venenatum is highly disease-causing, but if not, wheat and the F.venenatum live together.  Even when wheat grows as shown in upper left of the figure, F.venenatum may have invaded the wheat.  If fine-looking wheat is placed in a culture medium for mold, a sign of F.venenatum emerges as shown in the pictures on the right. 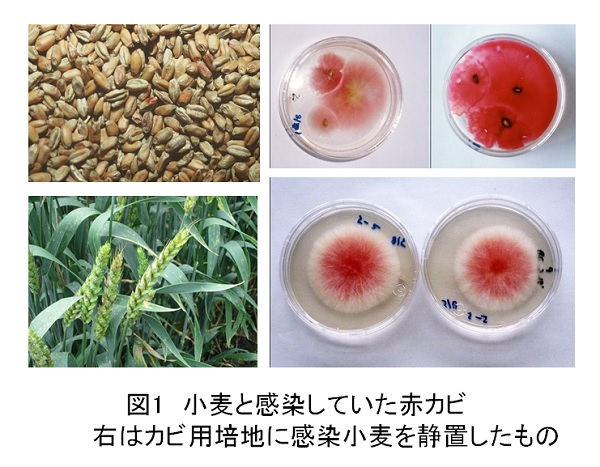 Fungal metabolite having toxicity to human/animal is called mycotoxin.  Fusarium-species infection to wheat is becoming a big issue around the world.  Fusarium graminearum (teleomorphic stage: Gibberella zeae) etc. produce mycotoxin in wheat and have caused food poisoning in Japan too.  If F.graminearum infects wheat during cultivation, mycotoxin can remain in harvested wheat.  In Japan, tentative criterion of deoxynivalenol contamination (DON) in wheat is 1.1 mg/kg.

Figure 2 explains fungus-derived protein that has been used as food in England since 40 years ago.  Now this protein is eaten in the United States, too. We have to give cattle more than 10 kg of feed in order to derive 1-kg beef.  Even chickens need 2 to 4 kg of feed. If we cultivate F.venenatum using wheat in a tank as shown in the figure, we can acquire protein more effectively.  1 kg of protein food called Quorn can be derived from 2-kg wheat. Quorn tastes like chicken and is used for cooking. 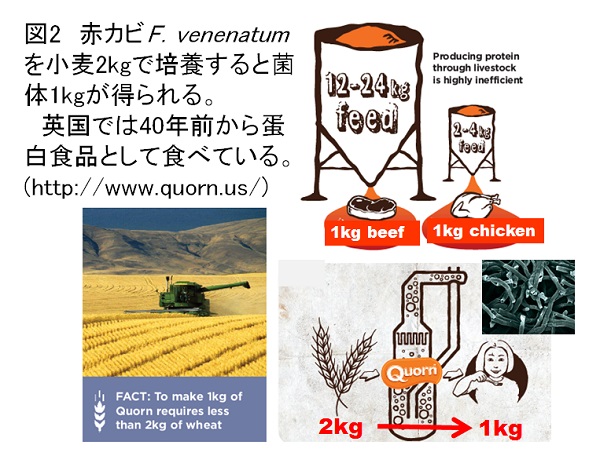 We have to keep trying to turn microorganisms into food resources in order to secure food in time to come.  Insects are being utilized as food resources. Japan has various kinds of traditional fermented food, but an attempt to eat culture yeast has failed acquiring an unflattering nickname of “petro-protein”.  The fungus which has been consumed in England used to be categorized as F.graminearum.  This fungus is closely related to the one that produces mycotoxin, and has been reclassified as F.venenatum.  In order to supply safe food stably, we have to utilize science and technology in a proactive manner.

An outbreak of food poisoning in the United States turned out to be caused by wheat flour, and its product recall has been conducted.  Products of 3 brands of the offending company have been recalled, and the recalled product coverage is being expanded to the secondary products such as bread mix.  Also, the flour products can possibly be stored in restaurants or homes for many years after purchase.

After 4,530-ton flour had been voluntarily recalled, other O121 food poisoning cases arose, which led to the expansion in the coverage of flour recall.  As flour is sometimes used after a long period of preservation, contaminated flour that can cause food poisoning might be used for food in the future. Figure 3 shows the occurrence tendency of O121 food poisoning.  Flour is thought to have afflicted at least 42 people in 21 states. Food and Drug Administration (FDA) detected O121 from flours that patients consumed in 3 states, and identified strains same as those derived from the patients. 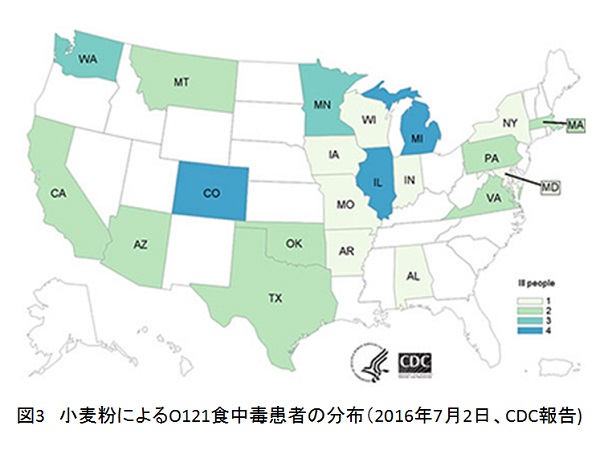 The homepage of the offending company states; “Last autumn, our customers became ill by eating uncooked dough and batter made with raw flour.  As other food-poisoning cases, which are doubted to be linked to our products, have recently happened, we have decided to expand our flour recall coverage.”

In the United Stated, wheat-flour doughs for home-made cookies or biscuits are commercially available.  Doughs for cake, bread, pizza or tortilla are also on shelves. Frozen doughs are also available. Some people eat these doughs without baking.  Some of these products contain egg, so it had been feared that eating them unbaked might cause food poisoning. In the investigation of the cause, O121 corresponding to the patient-derived causative microorganism was detected from the flour left by the patient.  Accordingly, FDA advices consumers not to eat or foretaste unbaked doughs.

FDS also points out the fact that not only eating unbaked doughs but touching them or raw flour can cause O121 infection.  Care should be exercised in playing with “flour clays”. Hygiene control from wheat farms to the table is required. If water etc. is added, flour turns a breeding ground for microorganisms such as O121.  We should not leave flour in a dirty environment. Also, if you add water etc. to flour, you should eat the flour after baking. You should pay attention to cleanups after using flour, too.