Figure 1 shows dairy cattle in Hokkaido and a glass of heat-sterilized milk.  I think many of you believe that milks should be sterilized to drink.  In fact, a farm in Hokkaido produces unsterilized milk as “special milk” with the approval from Ministry of Health, Labour and Welfare. 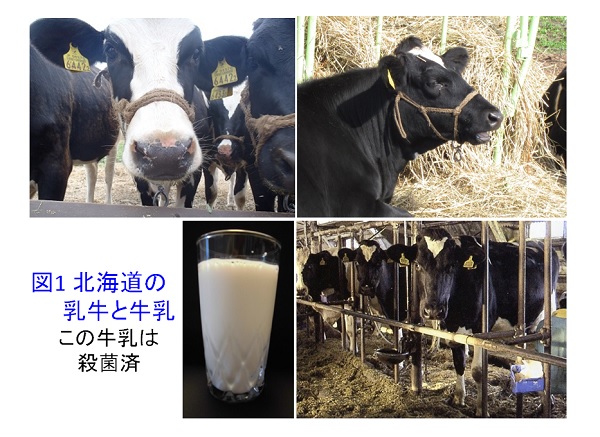 There is a country with a long history of dispute over raw milk --- United States of America.  American people consume a huge amount of milk.  As the name suggests, this country is composed of 50 states.  Some states prohibit the sale of raw milk, some do not.  Cross-state distribution is under control of Food and Drug Administration (FDA) and sterilization is required.  Centers for Disease Control and Prevention (CDC) estimates that 3% of the American people drink raw milk. CDC, along with FDA, recommends that these people should drink milk after sterilization.  This is because milk is vulnerable to contamination of disease agents such as enterohemorrhagic Escherichia coli O157:H7 shown in Table 1.  Also, as milk is rich in water and nutrition, it can be a comfortable harboring place for disease agents.

The fact that milk transmits disease agents had remained unknown until Pasteur revealed the need to sterilize milks (see my column #8).  It's not only food poisoning bacteria, such as O157, that are transmitted.  Infection-causing bacteria such as tuberculosis, listeria, campylobacter, salmonella, and Brucella, and also Q fever rickettsia are transmitted by unsterilized milk.  If both dairy cattle and humans suffer, the case is called zoonosis.

In the United States, a food-poisoning incident caused by raw milk took place in Utah sickening 99 people including one death in 2014.  Its causative microorganism was campylobacter.  In the same year, raw milk killed one person in Tennessee too.  The causative microorganism was Listeria monocytogenes.  In Tennessee, raw milk caused O157 food poisoning also in 2013 affecting many children.  It was fortunate that this incident killed nobody, but some kids suffered from serious kidney problems.  If they had drunk sterilized milk, they had been spared the damage. 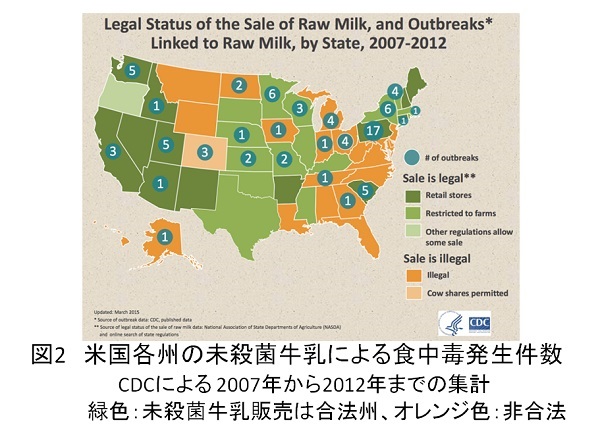 According to CDC, there are a variety of causes and chances of milk contamination.

(1)   Contamination by feces of cows

(2)   Diseases of cows such as garget

(3)   Potential pathogens such as tuberculosis

(4)   Microorganisms on the skin of cows

5)   Dust in barns and milking equipment

(7)   Humans and their clothings

Figure 2, created by CDC, shows number of food-poisoning incidents caused by raw milk in each state from 2007 to 2012.  Green-colored states permit the sale of raw milk, and orange-colored ones prohibit it.  Food-poisoning incidents caused by raw milk occur more frequently in green-colored states, which suggests the riskiness of unsterilized milk.  Raw milk is regarded as a high-risk food in Europe, but total ban of its distribution seems to be difficult to impose.  A special approval is required to sell raw milk in that region.