#26 Foodborne Diseases in Japan and the World

Ministry of Health, Labour and Welfare has released the statistics of food poisoning incidents happened in Japan during 2015 on its website. 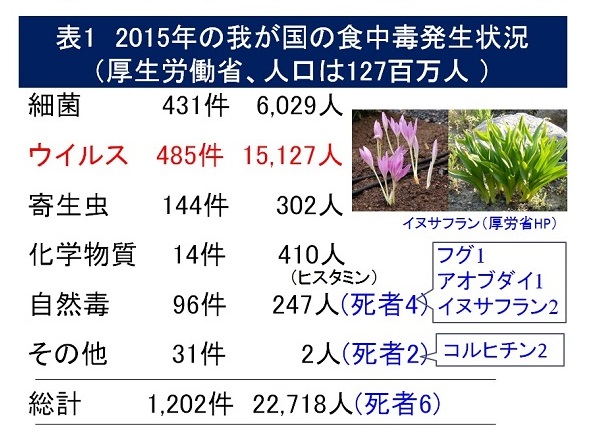 Table 1 shows the outline of the statistics.  Ratio of each food-poisoning agent in the numbers of cases and patients is shown in Figure 1.  Table 2 shows the breakdown of food-poisoning cases caused by microorganisms and viruses. 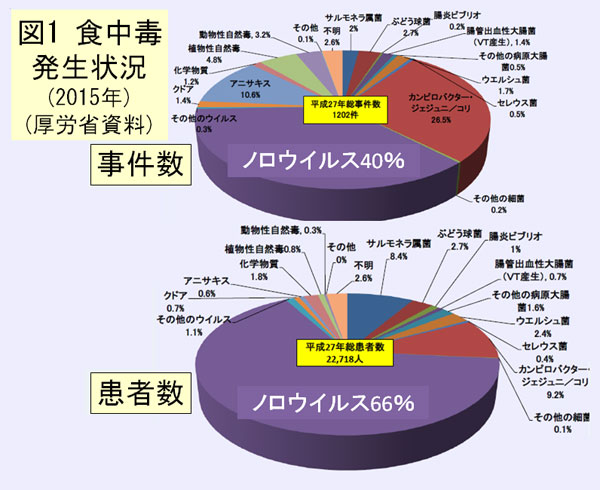 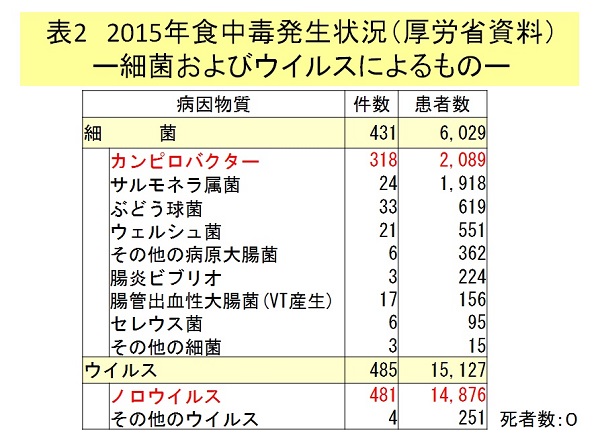 1) Occurrence tendency of foodborne diseases in the world 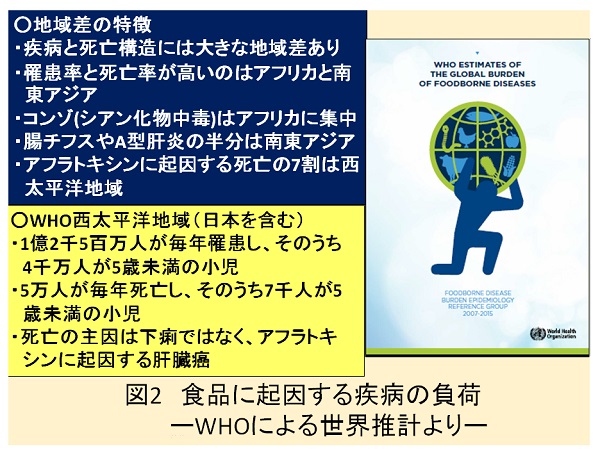 This report deals with foodborne diseases caused by 31 agents (microorganisms, viruses, parasites, toxins, chemical substances).  WHO states that this report has unveiled an outline of the damage from contaminated foods that has been difficult to estimate.  Understanding which foodborne factors are causing problems in which regions of the world, it describes, enables the government, public, and food industry to take effective actions.

Dr. Kazuaki Miyagisima has served as the manger of WHO department of Food Safety and Zoonoses.  He says, “This estimate is the result of 10-year efforts by more than 100 specialists throughout the world.  I think more data should be collected to enhance the estimate.  Even so, this finding has revealed that foodborne diseases do tremendous damage, and people around the world, especially children under 5 years old and low-income communities, are seriously affected.”

More than half of the world’s foodborne diseases are diarrheal illnesses, whose annual number of patients is estimated to be 550 million including death of 230,000 people.  It has been reported that diarrheal illness is often developed by eating raw or undercooked meat, egg, fresh produce or diary contaminated with norovirus, campylobacter, non-typhoidal salmonella, pathogenic coli, etc.  There are other disease agents such as typhoid bacterium, hepatitis A virus, Taenia solium, and aflatoxin.

As I mentioned in my column #25, food poisoning cases in Japan are counted based on notifications from doctors.  Therefore, cases without notification or doctor’s consultation would be ignored.  Even considering this fact, the number of foodborne diseases per population in Japan is small in international comparison.  Death of 7 people in 2015, all of which are the elderly over 70 years old, is due to food poisoning caused by natural toxins.  Colchicine, categorized in Table 1 as “Others”, is an extremely poisonous compound.  Although the causative agent turned out colchicine, causative food remained unknown.

Japanese people enjoy a wide variety of foods from perishables to highly processed ones, and food safety in this country can be said to be maintained at a high level.  However, there have been also unfavorable movements such as pursuit of zero risk or factual detour for profit.  It is necessary to increase the transparency of food chains so that people would not avoid many kinds of foods from unscientific fear or anxiety.  Also, the amount of food loss in this country is 5 to 8 million tons annually (world’s food aid is approximately 4 million tons per year).

You can have too much of a good thing, can’t you?

1) WHO estimates of the global burden of foodborne diseases