Diseases passed from one person to another are collectively called infections.

Infections, which were called “epidemics” due to its predisposition, spread in a short time to sicken and sometimes even kill many people without proper countermeasures.  Especially infectious diseases with a high mortality rate need strict measures.  Patients can be isolated as needed, but excessive isolations might lead to human rights violations.  Therefore, Act on Prevention of Infectious Diseases and Medical Care for Patients Suffering Infectious Diseases (Infectious Disease Law in short) specifies proper prevention and countermeasures against infections.

How are infections transmitted and extended?  Let us see a case of Norovirus outbreak (Table 1). 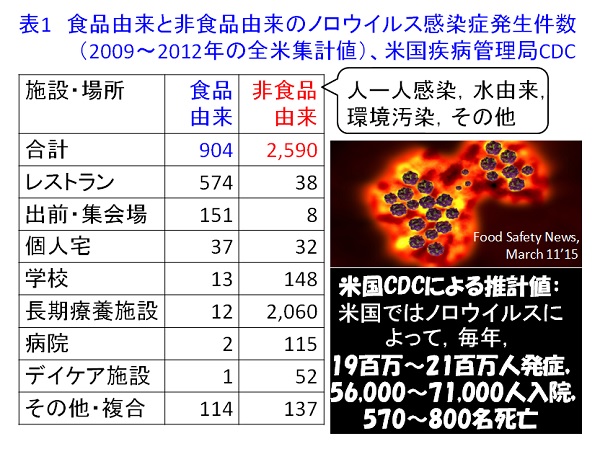 Existence of Norovirus as a pathogenic microorganism starts the process.  This virus grows in the intestine of a carrier and then passes on to other people.  Once it develops, vomiting and/or diarrhea will occur and Norovirus will be carried out of the body.  Even carriers without symptoms (people in this group are called healthy carriers) pass Norovirus out of their bodies.

Eliminated Norovirus floats in the air accompanied by diarrhea stool or vomitus.  If someone happens to be there, the virus enters the person’s body through the mouth and nose and begins to grow if it reaches to the intestine.  A faucet, doorknob, or food also transmits virus to humans.  If an infected person has no immunity to Norovirus, he/she will experience an onset.  Infected people will transmit Norovirus as carriers.  Thus infection will occur and spread from human to human.

Infectious Disease Law classifies infections into Category 1 to 5 as shown in Tables 2 and 3. 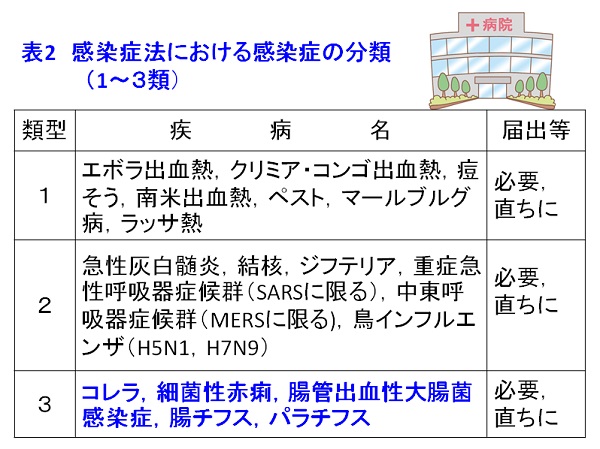 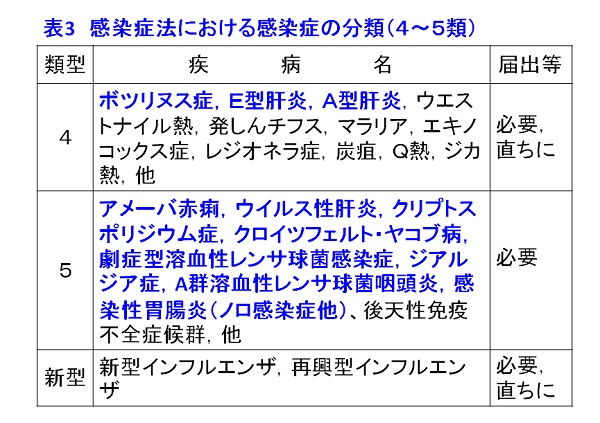 When infection-causing viruses/microorganisms are transmitted by food, the case will be registered as a food poisoning incident as well.  Therefore, the doctor that made a diagnosis is obliged to report to a public health center.  Enterohemorrhagic Escherichia coli infection, represented by O157, needs to be reported as a Category 3 infection as shown in Table 2 without any exception.

According to the infectious disease surveillance by Ministry of Health, Labour and Welfare, the number of people who are reported by doctors as infected individuals is around 4,000 annually.  On the contrary, only about 300 people are reported to and registered by the Ministry as patients of enterohemorrhagic Escherichia coli infection each year.  I think the investigative method should be improved to precisely understand the occurrence of food poisoning.