Since I grew up in Kitakyushu where puffers are heavily consumed, I have had many opportunities to eat puffer fishes.  Discovery of puffer bones from shell mounds of Jomon Period (the 131st century BC to the 4th century BC) indicates the Japanese long-lasting tradition of puffer consumption.  As puffers have a deadly poison called tetrodotoxin (TTX), few ethnic groups have the custom of eating them.  Loss of many lives due to puffer toxin has brought about regulations which require that puffers should be cleaned by specially licensed cooks.  TTX is a deadly poison with thousandfold toxicity of potassium cyanide.  It is resistant to heat and will not be destroyed by ordinary cooking.  Lethal dose of adults is said to be about 2mg. 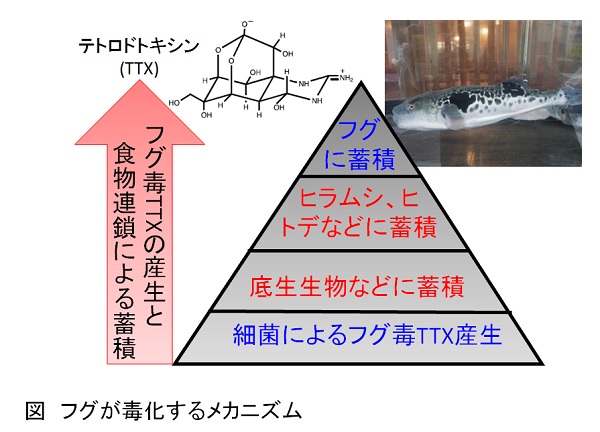 TTX is detected from Tetraodontidae (including Diodon holocanthus).  It is detected from marine species such as Yongeichthys criniger, Hapalochlaena fasciata, Babylonia japonica, Asterias amurensis, Atergatis floridus, and algae.  It is also detected from amphibians living in freshwater environment such as newt and frog.  Although the reason puffers become toxic remains unexplained in detail, but one thing is almost certain; TTX is produced by microorganisms.  It has been revealed that Vibrio alginolyticus, V.damsela, Pseudomonous, Staphylococcus etc. produce TTX.  Microorganisms and/or their product, TTX, will be absorbed by plankton or benthic organisms, which will be absorbed by polyclad, starfish, or snail through food chain.  Puffers consume these creatures, and this is considered as the reason why puffers become toxic.  Probably many creatures excrete TTX as a waste even if they absorb it through food chain, whereas the above-mentioned TTX-detected creatures accumulate it.

Table 1 shows the characteristics of TTX in puffers. 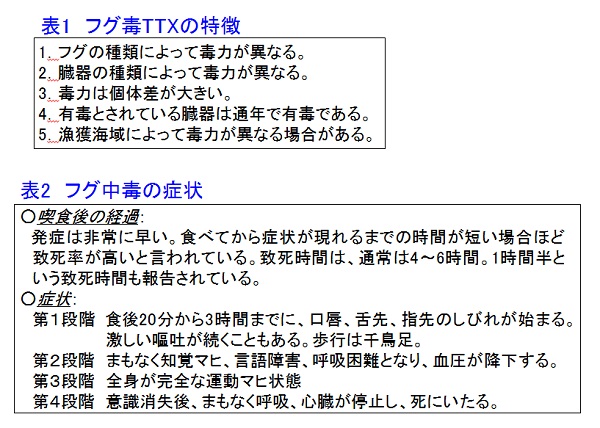 2) In case you get symptoms possibly of puffer poisoning

If you feel symptoms such as twitches around your mouth after eating puffers, you should be taken to a hospital immediately.  It is important to tell the doctor that you have eaten puffer fish or something like that.  Since shorter incubation period after eating leads to a higher mortality, you need to promptly undergo proper procedures at a hospital such as respiratory management.

It has been revealed that puffers artificially raised from eggs under control of feeding and living environment are non-poisonous.  However, there is no guarantee at the moment that non-poisonous farmed puffers can be supplied stably.  It has been reported that when farmed and natural puffers were put into a same tank, farmed puffers attacked natural ones and farmed puffers turned to be poisonous.  Puffers have a behavior to release TTX from the body surface.  Food Safety Commission of Japan thinks of the mechanism that puffers become toxic as being yet to be clearly defined.  Farmed puffers should be risk-controlled as strictly as natural ones until researches on TTX-producing microorganisms will be more advanced and information provision and risk analysis will be properly performed.

TTX might be a life-protecting substance for puffers.  Farmed puffers are said to have compromised ability, in comparison with natural ones, to resist fish diseases or parasites.  It seems that puffers take in toxin through food chain in order to use it for self-protection.

3) Food Safety Commission of Japan: Health Effects Assessment of Takifugu Liver Farmed in a Manner Proposed by Saga Prefecture and Its Ureshino Town Based on Act on Special Zones for Structural Reform (2006)