In order to ensure food safety, microbiological criteria/standards for foods are stipulated in Japan.  They are legally based upon Food Sanitation Act of Japan.  Article 5 of this act states that food should be handled “in a clean and sanitary manner”, and Article 6 provides that unsanitary foods “shall not be sold”.  Article 9 prohibits sales of meats “which have or are suspected to have any of the diseases listed”, and Article 11 states that “the Minister of Health, Labour and Welfare may establish the criteria” for food. 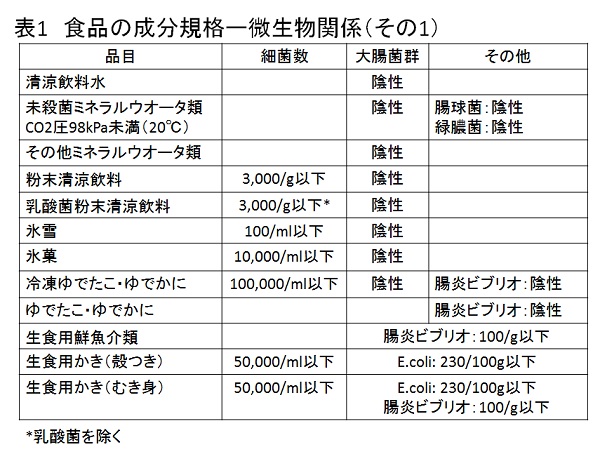 1) Examples of microbiological criteria for food

Tables 1-3 show microbiological criteria for each food item specified under Ministry of Health and Welfare Notification No. 370.

Hygiene indicators such as bacterial count and coliforms are established for some kinds of foods.  Bacterial count is also called as viable count.  This is a representative indicator that shows the level of overall microbial contamination of food.  It is usually calculated from number of colonies formed after 48-hours incubation at 32-35°C.  This indicator is also expressed as total viable count, aerobic count, or standard plate count.

It is important to note that obligate anaerobic bacteria, microaerophilic bacteria, halophilic bacteria, and psychrotrophic bacteria etc. do not grow and will not be counted.  Although bacterial count is not suitable as a hygiene indicator for foods containing numerous bacteria such as lactobacillus beverage or fermented food, its high figure can suggest the possibility of unsanitary condition of many other foods. 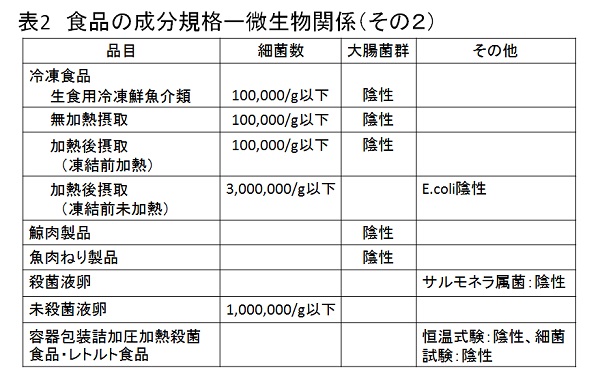 Coliforms and E. coli (in italic font) are major hygiene indicators to estimate sanitary conditions of food.  Coliforms are group of facultatively anaerobic bacteria that produces acid and gas after dissolving Gram-negative asporogenic bacilli and lactose.  This is not based on biological classification but an administrative term.

Among this group, types of bacteria that grow at 44.5°C are called fecal coliforms.   If IMViC tests (Indole test (I), Methyl Red test (M), Voges Proskauer test (Vi) and Citrate utilization test (C)) show “+ + - - “, the microorganism will be classified as E.coli.  As this group contains E.coli at high rates, fecal coliforms were grouped together to estimate the presence of E.coli without conducting cumbersome confirmation tests.  E.coli (in gothic font, Tables 1-3) appears in Japanese compositional standards refers to this group of microorganisms.  If E. coli or E. coli was detected from a food, the food is regarded as unsanitary with a possibility of fecal contamination of human or aminal.

Coliforms were adopted as hygiene indicators in order to determine if water is hygienically drinkable or not.  Since coliforms exist in foods (especially vegetables) even without fecal contamination, they do not suggest hygiene conditions of unheated foods.  On the contrary, coriforms detected from heated foods suggest the inadequacy of heating or cross-contamination after heating.

If E. coli or E. coli was detected from a food, the food is highly possible of fecal contamination and was possibly handled in more unhygienic way than foods from which coliforms are detected. 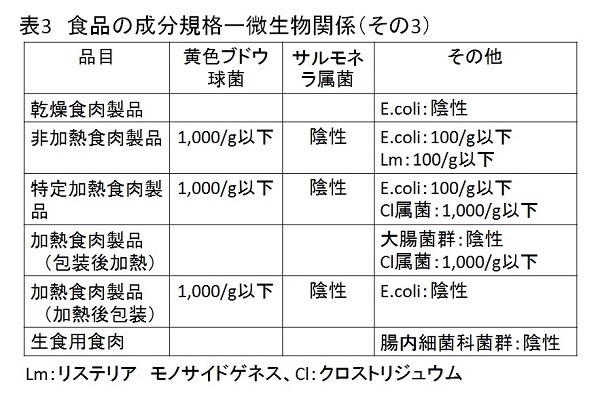 1) Ministry of Health, Labour and Welfare: Criteria and Standards for Each Food Group