Food, Microorganisms and Vitamin I

Humans are heterotrophic beings.  We survive by consuming other creatures, and microorganisms may reside in these creatures.  In this column series, I would like to deal with (1) sicknesses caused by eating or drinking, (2) causes of food spoilage, and (3) microorganisms closely related to our foods.

In the course of the discussion, various measures to maintain a healthy diet will be detailed.  However, please take “liquid fermented food” at your own risk in order not to drink too much and bother people around you!

There is a term “microbiological control of food”.  In the Japanese diet, we have long been receiving much benefit from microorganisms, whereas many of our ancestors have suffered from food-borne pathogens and their toxins.

Microbiological control would experience repeated failures without considering how and by whom the food at hand will be consumed.  Please make sustained efforts in a spirit of “Vitamin I (love)” to bring coexistence and co-prosperity of our food and microorganisms. 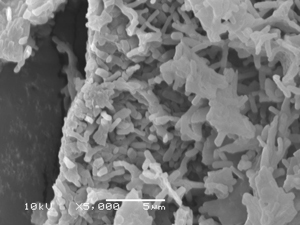 Humans have had a habit of ingesting other creatures and their metabolites.  Most of our foods, other than water, salt and some additives, are of biological origin.  Our foods may contain ingredients harmful to human beings or transmit various pathogens.

On the other hand, we enjoy a variety of foods which microorganisms produce ---alcoholic beverages, miso (soy bean paste) and soy sauce are some examples.  In their production processes, an action called “fermentation” is caused.  The picture on the left shows how Bacillus subtilis var. natto forms a population.

Foods may be contaminated by harmful microorganisms or toxic substances.  Also, if left out at room temperature, foods may experience quality change called decay or spoilage and turn inedible.

The following figure shows classification of phenomena happening when foods change in quality and turn inedible.

In many cases of food deterioration, microorganisms are involved.  Microorganisms began inhabiting the earth long before the emergence of humans.  Microorganisms that have survived to the present are believed to have become more and more varied to cope with changes in global environment.  Smallness is a distinctive characteristic of microorganisms. 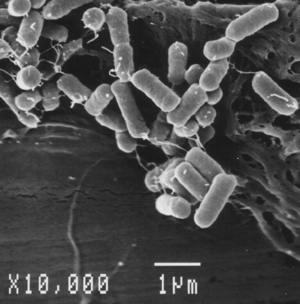 The picture on the right is an electron micrograph that shows Enterohemorrhagic Escherichia coli O157:H7, which has been bothering us.

Molds are also called “fungi” or “mycelia”.  They elongate themselves to intake nutrient and water.

Viruses are ranked between living and non-living material because they cannot reproduce by themselves.  They are even smaller than bacteria such as O157.  Norovirus, which afflicts many people, is about 30nm.  1nm is 1/1000 of 1μm, so linearly-arranged 33,333 noroviruses would measure about 1mm.

How should we live with such small microorganisms?  Sun Tzu once remarked; "Know yourself as well as your enemy".  From next column, let us explore the properties of microorganisms and countermeasures against their threat.

References (all in Japanese)