"Washoku", traditional Japanese cuisine, was added to UNESCO's Intangible Cultural Heritage list at the end of last year.  The dietary culture, which has been handed down for generations as a social heritage, was acclaimed as an expression of Japanese people’s respect for the nature.

Washoku is appreciated in many points --- ingredients varying with geographical dimensions, culinary quality, nutritional balance, and hospitality such as food arrangements making use of beauty of the serving dishes and nature environment.  Also, its role in social conventions, closely related with seasons and annual events such as New Year and rice planting, is highly praised.

It is truly something to celebrate that Washoku was internationally recognized in such many respects.  At the same time, however, we have to remember that the delicate beauty of Washoku is closely linked to the very-Japanese hygienic cooking environment.

People emphasize that the registration of Washoku is due not to commercialism but to conservation activities of Japanese dietary culture and identity.  I still believe that the healthiness of Washoku is one of the major drivers behind its recognition around the world.  The fact that eating well-balanced Washoku leads to longevity seems to have made Washoku internationally renowned.

In Europe, a word for “health” acquired the meaning of “hygiene” as well.  In 19th century, food industry developed in the wake of the Industrial Revolution, and hygiene standards, some of which are still in operation, began to be established.

The food industry made good progress and long-life food and pathogen-reduction production process were developed in this period.  In 1864, Louis Pasteur, a French chemist, invented pasteurization of preservative food and Carl von Linde devised its cooling method in 1895.

Meanwhile in Japan, meat diet was being gradually adopted and refrigerated storage of meats and fishery products using ice produced more foods that combine Eastern and Western dishes.  Also, along with the change from box-tray meal for each person to sharing a Japanese-style table with family members, expression of gratitude before and after meals (“Itadakimasu” and “Gochisosama”) became a dietary habit. 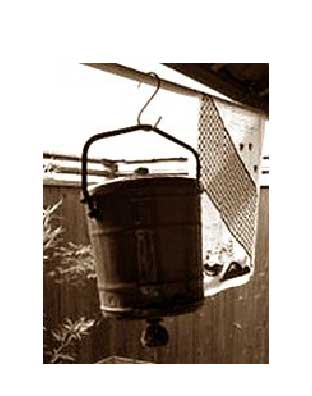 Japanese people as a whole have been clean-lovers since ancient times.  We traditionally treat our cooking utensils, such as cutting boards and knives, with the greatest care.  In this context, professional cooks used to be called “knife man (hocho-nin)”.  Although no official standard for food hygiene had been established in Japan in those days, their working environment was clean and well-managed with discipline.

Thus, some kind of hygiene standard already existed in Japan owing to various traditions even without official ones.  These traditional behaviors still remain in modern Japanese people in part.

Above all, already in the Edo Period (1603-1868), Japanese people were accustomed to wash their hands with pails or washbasins when leaving toilets.  In Taisho-Period (1912-1926), hand-washing instruments hanging from eaves made from ceramic, tin, or enamel came into existence.  They enabled cleaner hand-washing with their flowing water instead of dead water, and established a system to prevent toilet contaminations from being delivered to other places.

Japanese culture has been fostered in line with the history of Washoku and takes root in modern hygiene control in Japan.  I believe this fact played an important role in building Washoku’s international position.

I strongly hope that Japanese “clean” culture will produce many more exquisite dishes and they will reach every corner of the world.