For food manufactures or restaurants which produce a large amount of food, safety and security of food is a highly important issue.  When a serious food-poisoning incident is covered on television, the staff in charge of food hygiene will develop a tense feeling as if it happened to themselves.

How do managers or food-hygiene staff of such industries react to these incidents in order not to fall into the same rut?  I think they are just repeating the same old guidance such as wash your hands well, wash the utensils well, or control the refrigerators’ temperature well.

They surely are the essential activities in general food hygiene control, but I think they are not equiponderant and their priority should vary according to climate, season, dietary culture and food poisoning pattern.

As shown in Figure 1 and 2, recent Japanese food-poisoning culprits follow a pattern that about 40% of them are norovirus and about 30% campylobacter.  Every year, these two microorganisms cause about 70% of food-poisoning incidents.

That is to say, if you take substantive measures against these two microorganisms, you can reduce the food-poisoning risk by 70%.  It might be almost impossible to eliminate 70% of the risk, but for people in charge of food hygiene control, it is well worth focusing on this point.

As most of the campylobacter food-poisoning cases happen through poultry, it might be the best countermeasure to avoid cross-contamination from that material thoroughly.  However, the process is hard to control and many incidents are actually due to cross-contamination at kitchens of the facilities.  I believe special rules and responsible staff should be defined for processing poultry.

As recent infection pattern of Norovirus lies in cross-contamination, thorough prevention of it would be the minimum goal. 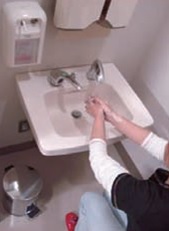 What kind of cross-contamination comes about the most?  It is a transmission from toilets to food products through humans.  We have to prevent Norovirus from going out of toilets which are usually highly contaminated.

As shown in the picture, if you wash your hands remaining seated right after relieving yourself and then go on to the next step such as pulling your trousers up, excretory contaminations can be kept inside toilets.

This method has already been adopted by many facilities for school lunch.  I think this is also effective for restaurants and food factories.

There are many more ways to avoid the outgo of Norovirus from toilets.