I have talked about the risks of raw milk in my previous column (#27).  In June, the news that Australian government has authorized the sale of milk after high-pressure sterilization (Figure 1) was delivered.  As milk is vulnerable to microbial contamination due to its nutrient, it is risky to supply cow milk as it is after expression.  However, there are many people around the world, as I mentioned, who want to take milk components without heating.  In Australia, sustained efforts to respond to this need have been made. 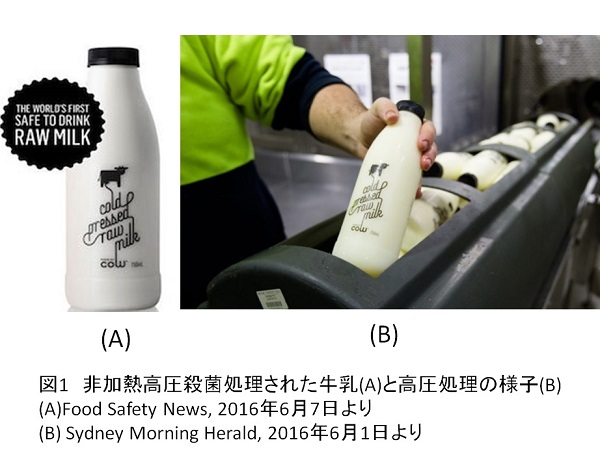 1) In pursuit of effects equaling/surpassing pasteurization

In Australia, it had been permitted for dairy farmers to drink their own pumped milk as it is, but selling the raw milk for drinking had been prohibited.  An infant who was made drink bathing-use milk lost his life, which led to the mandatory sterilization of drinking-use milk.  Also, milk for bathing use must be made undrinkable by adding bittering agents.  In Australia, commercial milk should be heat-sterilized by means such as pasteurization (heating at 63°C for 30 minutes, see my column #8), or sterilized by other means with either equaling or surpassing effects.

Figure 2 shows a method which destroys/inactivates bacterial cells in food by high water pressure.  This technology was developed by Rikimaru Hayashi, the late professor emeritus at the University of Kyoto.  This technology, high-pressure treatment, has been applied to milk production and approved to be as effective as pasteurization.  The method adopted in Australia is the horizontal movement system shown at right in Figure 2.

The picture at the right in Figure 1 shows bottles of milk sent out of the pressure device after processing.  This technology has already been applied to the production of fruit juice.  It took two-year verification test for milk producers to obtain the approval.

Though disease agents such as enterohemorrhagic Escherichia coli O157 are harmful to humans, they are striving to live their lives.  In microbial control of food, it is essential to sort out and examine factors on the sides of both food and human.  Milk is suitable for the growth of pathogens and nutrient-rich food for human too.  Sun Tzu’s lesson, "If you know both yourself and your enemy, you can come out of hundreds of battles without danger" is true in microbial control too.  In the battlefields of food-handling, we have to recognize what kind of consumers we aim to protect and what kind of pathogens --- parasite, virus, toxin produced by microorganisms such as mycotoxin --- we fight against. 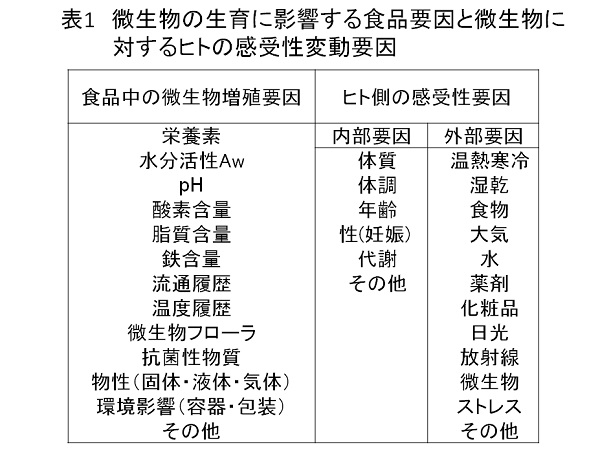 Gamma-ray irradiation can kill bacterial spores and disease agents except for viruses effectively, but this sterilizing method has not been approved in Japan yet.  We Japanese people have to take care not to run foul of the law.  This method is legal in the United States and one of its applications is the prevention of food poisoning of astronauts.

Due to the variousness of microorganism, food, and eater’s susceptibility factor, multiple methods are combined to conduct microbial control.  Controlling microorganisms comprehensively by adjusting temperature, pH, Aw, oxidation-reduction potential, etc. of food is called a hurdle technology.  Factors such as temperature and pH of food are regarded as individual hurdles.  Multiple hurdles are established in order to control microorganisms without damaging the quality of food such as color, taste, aroma, and texture.  Hurdle technology is evolving along with the development of packaging technologies that separate food from environment or adjust the density of moisture/oxygen.

Non-thermal sterilization technologies would be ineffective if misused.  It is necessary to use packaging technologies and/or hurdle technology to prevent cross-contamination and preserve the quality of food.  Also, if consumers are irresponsible, even safe and quality food would fall irresponsible.  I think whole nation should have a better understanding of food and giving the precious next generation food educations are important.